This is Part 6 of 10 in the eFiling Blog Series, check out Part 5 here.

Beyond how the document is delivered, consider what is delivered. At the most primitive level, imaged documents – basically, pictures – can be delivered. PDF documents containing image and text are marginally better. Yes, these documents are electronic; but it’s like playing “Where’s Waldo” to find the relevant information on the page. eFiling documents in this way is referred to as “Document-centric eFiling”.

At the other end of the spectrum, there may be no document at all. Data is entered by the sender, validated, transmitted and stored by the eFiling system. Virtually all commerce on the Internet is done using a data-centric approach. The important point is that the focus is on the data, not on any particular document – and once you have validated data in a computer many other efficiencies are possible.

So why do many eFiling systems still use a document-centric approach? The answer lies in tradition. Courts are steeped in it, and the rules were developed before computers existed – so the paper document has reliably served the role as the primary communication vehicle for centuries.

Traditional documents still serve many functions. Most married couples would rather frame their wedding certificate than a URL, for instance. But where a document exists to be a vehicle for transmission and/or a repository of the data, it is simply in the way. So data-centric systems produce documents on-the-fly, when needed.

In addition, there are some very important side benefits to a Court or Prosecutor in adopting a data-centric model: 1) The recipient has reduced data entry costs (and less data entry errors), 2) The filer provides more complete data – because the eFiling system prompts and validates data along the way, 3) cases flow faster with less exceptions, 4) searching and managing cases is more productive, and many other benefits.

The spectrum from most primitive (playing “Where’s Waldo on a screen”) to most sophisticated (totally data-centric) has been labeled the eCourts Maturity Model.  The National Center provides an excellent overview by Bob Roper and Jorge Basta.  Using this model, courts can determine where they fall on the maturity spectrum.

The Maturity Model has two dimensions: First, how closely is data capture, transmission, and storage tied to documents (called the Forms/Documents Migration Dimension); and second, what is the business and technological environment of the court (called the System Characteristics dimension). 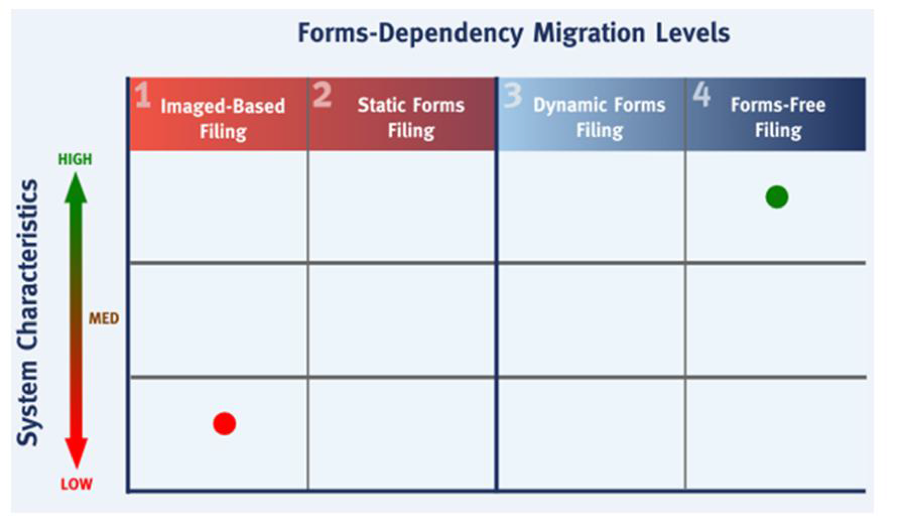 Along the Forms/Document Migration dimension, the spectrum runs from scanned paper (image based forms) to static PDFs  (static forms) to fixed PDF based forms with data fields (dynamic forms) to wizard-like data entry, where forms are generated later as needed (forms-free).

The Systems Characteristics include factors such as who is filing, what can the eFiling system do (what are its functions and features), how well does it integrate with other systems, how is the system designed (including whether it is based on standards), and how well can the court adapt its culture and business processes to include the new ways of doing things.

With the tremendous strides in the technological power and sophistication of not just eFiling but all court supporting technology, the real question for a court today has shifted  to where the court wants to be. While few may want to be stuck in the lower left corner, not every court is necessarily anxious to try to move all the way to the upper right (see, for example, In Praise of Tortoises). Is the court ready to let go of the paper and wet signatures? Does the court itself, or its partners, have the systems and infrastructure in place to support true forms-free filing?

The point here is that there is a long way to go on the eFiling journey. For lots of reasons, many of them covered in past pieces here, moving to pure data-centric eFiling offers profound benefits. But it takes planning, work, and commitment.  Using the eCourts Maturity Model as one tool can help structure these efforts.

Coming up next: Blog 7 of 10: eFiling Blog Series – Criminal Cases