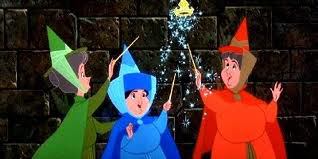 Walt Disney was a man way ahead of his time. Yes, long before anyone coined the term, ole’ Walt managed to embed a major plug for advanced Electronic Content Management with configurable workflow into his 1959 classic, Sleeping Beauty. This feat was remarkable, even for Disney, considering that it would be decades before ECM would be invented.

Don’t just take my word for it; go watch the movie. Now, I’ll grant you he didn’t use the terms “ECM”, “configurable”, or “workflow”. No, futurist that he was, Walt cleverly used code words and allegorical situations. But, when you see the scenes in which the Fairy Godmothers try to manage their “household” WITHOUT workflow (they use the code-word “magic” instead; but, clearly, it’s configurable workflow), things are a hot mess. Once they return to using workflow – ok; call it “magic” if you insist – everything settles right in and works like, ahem, a charm.

Yes, the dishes put themselves away. The cake not only puts itself together, but it’s quality is without compare. That doesn’t mean the ladies don’t create the cake. They decide what the result should be and fashion a masterpiece. But there’s no muss, no fuss, and absolutely no wasted effort, duplication, errors, or sloppy work. Materials, ingredients, pots and pans, utensils – all arrive just when needed, then clean themselves and put themselves away.

And that, ladies and gentlemen, is a practically perfect illustration of the power of ECM with workflow. For those who have implemented it, the thought of doing without it, however briefly, is no less terrifying than the thought of cooking and cleaning without magic was to the Fairy Godmothers. For those who have not implemented it, the purported benefits sound like, well, magic.

Consider: Not only did the cake get baked; but all the ancillary prep work and cleanup were automatically executed as fully integrated functions. Suppose holding a court hearing operated the same way. No gathering documents and files; that’s done. No arranging the materials for the judge; that’s done, too. The judge can hold the hearing, the output (order, hearing, warrant, whatever) can be generated with a flick of the wand — uh, or the proper command issued by the proper person (there’s a difference between this and magic?).

Afterwards, the files and documents can hie themselves to their proper next places, be it “storage” or the next step in the process; notices can generate themselves, and so on. Moreover, for those who like to keep track of what’s been done (that is, every court manager who ever lived) all the proper recordings of what has been done, who was involved, and so on will be made without even asking. Want the answer to  any type of statistical or historical question? Just ask.

Walt even foresaw one of the less obvious considerations with using magic; at least, less obvious until the first time you get burned. That is, the need for security. Fortunately for today’s courts, they’re not the first ones to try using magic in the heart of the woods with Maleficent on the prowl. Today’s systems come with robust security; and staff awareness and training are among the highest priorities of professional court managers. Courts have gotten very good about keeping their windows and chimneys shut, so to speak.

And then, there’s the final scene. As the Princess and The Prince dance into Happily Ever After, the Fairy Godmothers each change the color of the Princess’s gown to conform to their different fashion tastes. What a concept: Configurable display, to suit the needs, wants, and preferences of each particular user. Guess what? Your wish is granted.